Earth’s climate is getting so hot that temperatures in about a decade will probably blow past a level of warming that world leaders have sought to prevent, according to a report released Monday that the United Nations called a “code red for humanity.”

But scientists also eased back a bit on the likelihood of the absolute worst climate catastrophes.

The authoritative Intergovernmental Panel on Climate Change (IPCC) report, which calls climate change clearly human-caused and “unequivocal,” makes more precise and warmer forecasts for the 21st century than it did last time it was issued in 2013.

Each of five scenarios for the future, based on how much carbon emissions are cut, passes the more stringent of two thresholds set in the 2015 Paris climate agreement. World leaders agreed then to try to limit warming to 1.5 degrees Celsius (2.7 degrees Fahrenheit) above levels in the late 19th century because problems mount quickly after that. The world has already warmed nearly 1.1 degrees Celsius (2 degrees Fahrenheit) in the past century and a half. 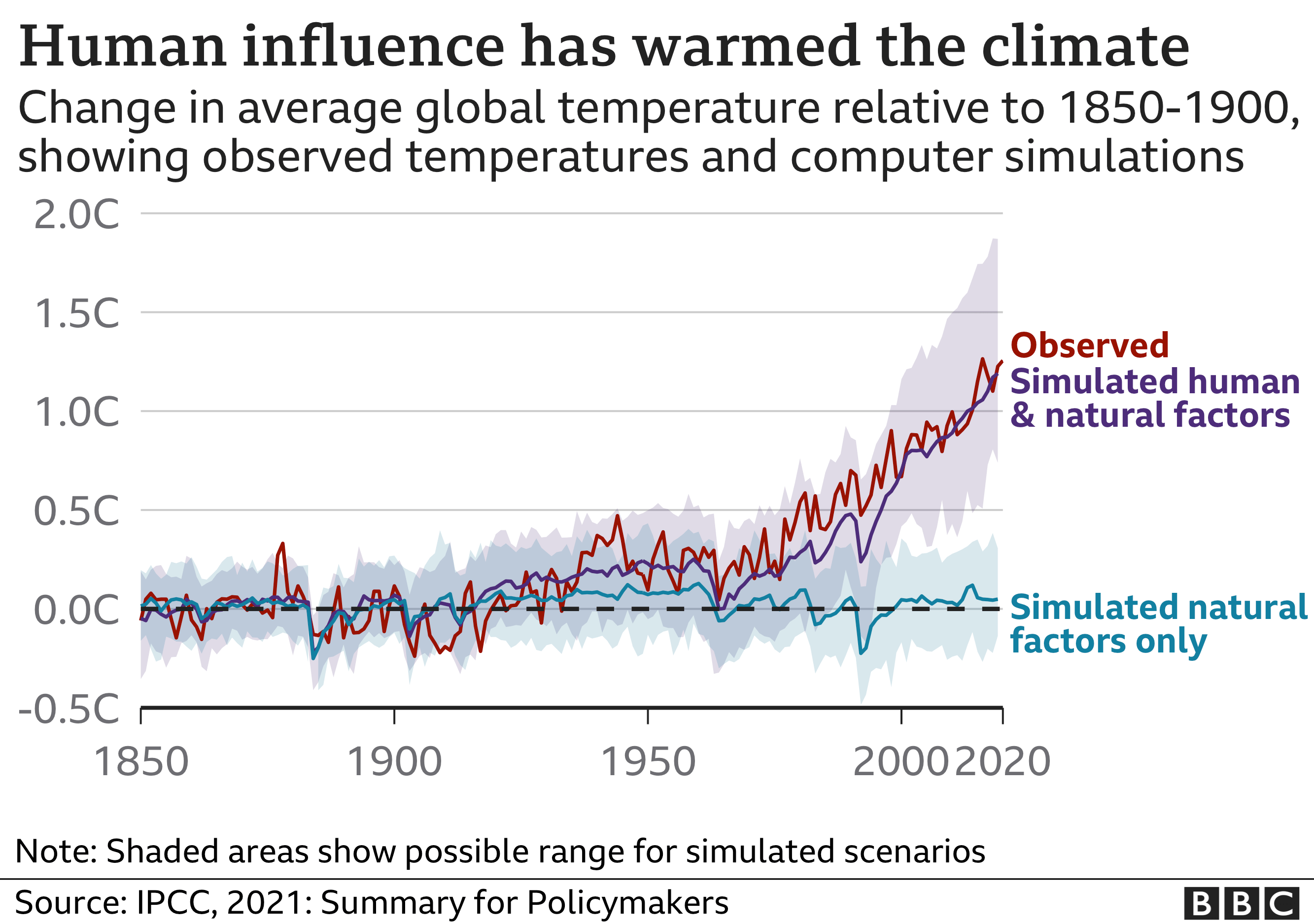 Under each scenario, the report said, the world will cross the 1.5 degrees Celsius warming mark in the 2030s, earlier than some past predictions. Warming has ramped up in recent years, data shows.

“Our report shows that we need to be prepared for going into that level of warming in the coming decades. But we can avoid further levels of warming by acting on greenhouse gas emissions,” said report co-chair Valerie Masson-Delmotte, a climate scientist at France’s Laboratory of Climate and Environment Sciences at the University of Paris-Saclay.

In three scenarios, the world will also likely exceed 2 degrees Celsius (3.6 degrees Fahrenheit) over pre-industrial times — the other, less stringent Paris goal — with far worse heat waves, droughts and flood-inducing downpours “unless deep reductions in carbon dioxide and other greenhouse gas emissions occur in the coming decades,” the report said.

“This report tells us that recent changes in the climate are widespread, rapid and intensifying, unprecedented in thousands of years,” said IPCC Vice Chair Ko Barrett, senior climate adviser for the U.S. National Oceanic and Atmospheric Administration.

The 3,000-plus-page report from 234 scientists said warming is already accelerating sea level rise and worsening extremes such as heat waves, droughts, floods and storms. Tropical cyclones are getting stronger and wetter, while Arctic sea ice is dwindling in the summer and permafrost is thawing. All of these trends will get worse, the report said.

For example, the kind of heat wave that used to happen only once every 50 years now happens once a decade, and if the world warms another degree Celsius (1.8 degrees Fahrenheit), it will happen twice every seven years, the report said.

As the planet warms, places will get hit more not just by extreme weather but by multiple climate disasters at once, the report said. That’s like what’s now happening in the Western U.S., where heat waves, drought and wildfires compound the damage, Mearns said. Extreme heat is also driving massive fires in Greece and Turkey. 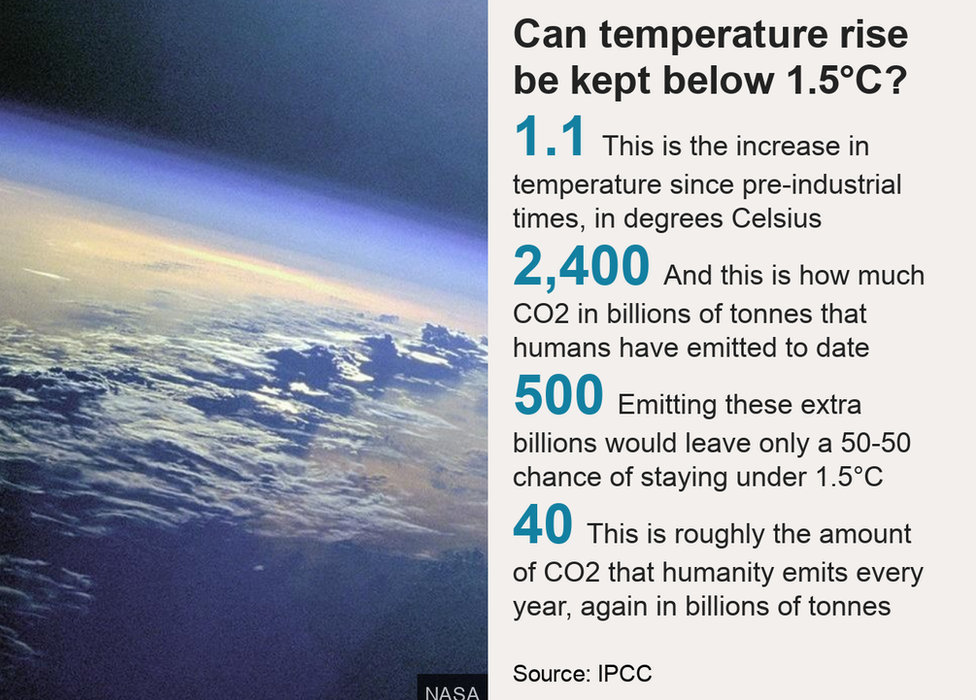 Some harm from climate change — dwindling ice sheets, rising sea levels and changes in the oceans as they lose oxygen and become more acidic — is “irreversible for centuries to millennia,” the report said.

The world is “locked in” to 15 to 30 centimeters (6 to 12 inches) of sea level rise by mid-century, said report co-author Bob Kopp of Rutgers University.

Nearly all of the warming that has happened on Earth can be blamed on emissions of heat-trapping gases such as carbon dioxide and methane. At most, natural forces or simple randomness can explain one- or two-tenths of a degree of warming, the report said.

The report described five different future scenarios based on how much the world reduces carbon emissions. They are: a future with incredibly large and quick pollution cuts; another with intense pollution cuts but not quite as massive; a scenario with moderate emission cuts; a fourth scenario where current plans to make small pollution reductions continue; and a fifth possible future involving continued increases in carbon pollution.

In five previous reports, the world was on that final hottest path, often nicknamed “business as usual.” But this time, the world is somewhere between the moderate path and the small pollution reductions scenario because of progress to curb climate change, said report co-author Claudia Tebaldi, a scientist at the U.S. Pacific Northwest National Lab.

While calling the report “a code red for humanity,” U.N. Secretary-General Antonio Guterres kept a sliver of hope that world leaders could still somehow prevent 1.5 degrees of warming, which he said is “perilously close.”

There is also a way for the world to stay at the 1.5-degree threshold with extreme and quick emission cuts, but even then, temperatures would rise 1.5 degrees Celsius in a decade and even beyond, before coming back down, said co-author Maisia Rojas Corrada, director of the Center for Climate and Resilience Research in Chile.

“Anything we can do to limit, to slow down, is going to pay off,” Tebaldi said. “And if we cannot get to 1.5, it’s probably going to be painful, but it’s better not to give up.” 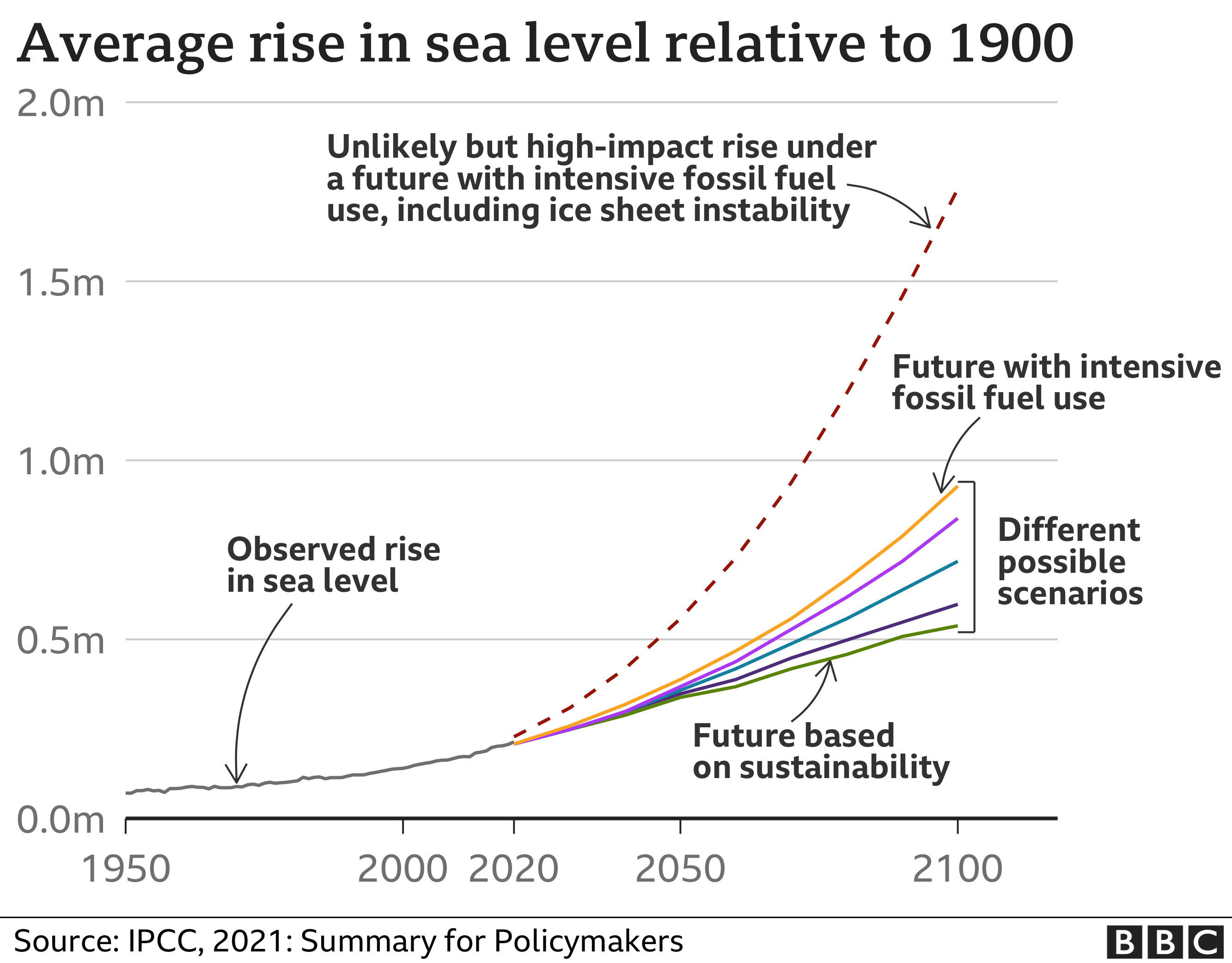 In the report’s worst-case scenario, the world could be around 3.3 degrees Celsius (5.9 degrees Fahrenheit) hotter than now by the end of the century. But that scenario looks increasingly unlikely, said report co-author and climate scientist Zeke Hausfather, climate change director of the Breakthrough Institute.

“We are a lot less likely to get lucky and end up with less warming than we thought,” Hausfather said. “At the same time, the odds of ending up in a much worse place than we expected if we do reduce our emissions are notably lower.”

A “major advance” in the understanding of how fast the world warms with each ton of carbon dioxide emitted allowed scientists to be far more precise in the scenarios in this report, Mason-Delmotte said.

The report said ultra-catastrophic disasters — commonly called “tipping points,” like ice sheet collapses and the abrupt slowdown of ocean currents — are “low likelihood” but cannot be ruled out. The much talked-about shutdown of Atlantic ocean currents, which would trigger massive weather shifts, is something that’s unlikely to happen in this century, Kopp said.

The report “provides a strong sense of urgency to do even more,” said Jane Lubchenco, the White House deputy science adviser.

In a new move, scientists emphasized how cutting airborne levels of methane — a powerful but short-lived gas that has soared to record levels — could help curb short-term warming. Lots of methane the atmosphere comes from leaks of natural gas, a major power source. Livestock also produces large amounts of the gas, a good chunk of it in cattle burps.

More than 100 countries have made informal pledges to achieve “net zero” human-caused carbon dioxide emissions sometime around mid-century, which will be a key part of climate negotiations this fall in Scotland. The report said those commitments are essential.

“It is still possible to forestall many of the most dire impacts,” Barrett said.

Dr. Momen stressed on the role of the academia, the researchers, the students in creating the platform to address the challenges of climate change in a fast and efficient way.

Young have to take charge for protecting the climate

Congratulated him on organising the July COP26 Ministerial successfully.

How data visualization can help you communicate effectively

Waning protection is to be expected, say experts.