The French flotilla of about 60 boats departed after a delegation met Jersey authorities. “It’s rubbish, I’m sorry,” said Cyril Piraud, one fisher who was part of the delegation, according to a reporter from the Ouest-France newspaper who was with the Normandy boats.

“I’m not sure why we even went to see them. They are putting all the blame on the French government, who they say did not provide them with the right information. If we do nothing, we’re going to end up being squeezed out, little by little. This can only be sorted out on dry land now. The [French] minister has to carry out her threats.”

The French foreign ministry said the UK has breached its Brexit agreement with the EU over how fishing permits to access UK waters are being issued to French boats so it is “acting in a spirit of responsibility”.

The row erupted after Paris threatened to cut off power to the island – which receives 95% of its electricity from France through three undersea cables – and French fishermen said they would blockade the main port.

A French foreign ministry spokesman said: “We want the situation to be quickly unblocked through the full implementation of the trade and cooperation agreement, which provides for continued access to UK waters for fishermen who worked in these waters before Brexit.

“This is our only objective and we want to mobilise all the levers to preserve the fishing industry and allow it to continue its activities.”

In a phone call to the chief minister of the island, John Le Fondré, his deputy and Ian Gorst, the external affairs minister, Johnson reiterated his “unequivocal support” for their efforts to resolve the Brexit row.

The head of the local fishers’ association, Don Thomson, said he was “confident” the Jersey government sent the ships off without concessions but with more time to get their paperwork submitted for the new fishing licences.

HMS Severn and HMS Tamar were deployed off Jersey in the early hours of Thursday as a “precautionary measure” as French fishers upped the ante in the dispute over Jersey’s new fishing restrictions.

The row erupted on Tuesday night when the French minister for maritime affairs, Annick Girardin, warned that the island’s electricity supply could be turned off in retaliation against the lack of access for the French fishing fleet to its waters. 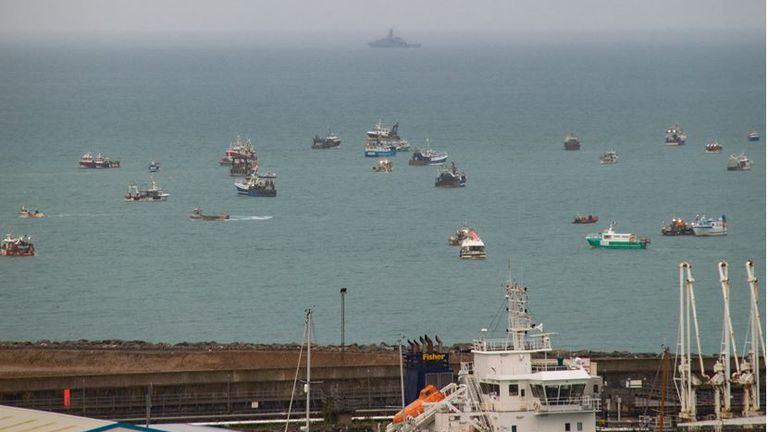 In an apparent tit-for-tat development, France also sent two of its gendarmerie patrol boats, PCG Athos and PCG Themis, on Thursday morning to the border waters to “monitor the situation and guarantee the safety of people at sea”.

About 60 French vessels amassed off the coast of St Helier at around 4.30am. HMS Severn and HMS Tamar observed about a mile away as they entered the harbour in a sea of red flare smoke at about 7am.

Downing Street said the patrol vessels, which are armed, were sent to “monitor the situation”, but some criticised the decision as a heavy-handed reaction designed to boost the Conservatives’ credentials on the day of local elections across Britain.

The protest was largely peaceful although initially the Commodore Goodwill freight ship was trapped and unable to leave the harbour.

There was also a skirmish when a French boat rammed a British vessel as it tried to move into the harbour at around 7am, witnesses said.

Dimitri Rogoff, who heads the group of Normandy fishers, said about 50 boats from French ports along the western Normandy coast joined the protest on Thursday morning, gathering their fleet off St Helier.

They were joined by several Jersey fishers including Chris Le Masurier, the owner of the Jersey Oyster Company, who described conditions placed upon the new post-Brexit fishing licences issued to Breton and Norman fishers as “insulting and discriminatory”.

Rogoff said the protest was not an attempt to blockade the port but rather a peaceful method of voicing anger over reduced access to Jersey waters.

“This isn’t an act of war,” Rogoff said in a phone interview. “It’s an act of protest.”

French fishers are protesting over the new licences, issued on Friday, which restrict for the first time the number of days they can operate in shared waters. 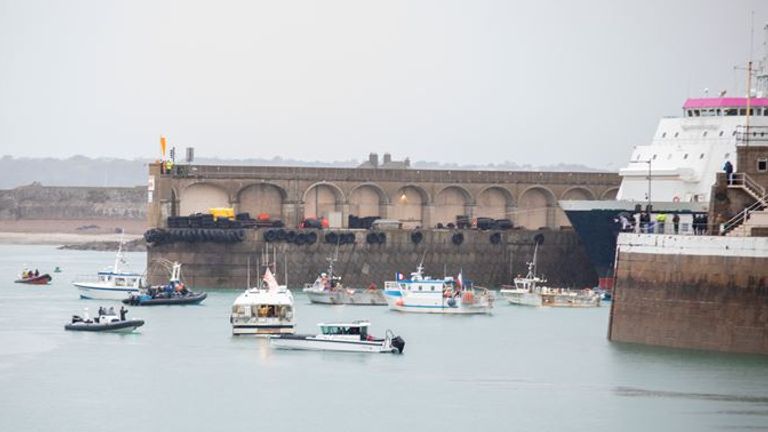 The new conditions imposed by the Jersey government on Friday include restrictions on both on access and fishing equipment in shared waters.

The French have complained that 17 boats have not received any licences and that many of the 41 vessels which do have licences have had restrictions imposed without warning.

“We won’t be intimidated by these manoeuvres,” he said. “Our wish is not to have tensions, but to have a quick and full application of the deal. That’s the case for Jersey and that’s the case for the licences we are waiting for in the Hauts-de-France [region]. We’re working nonstop with the European Commission and British authorities.”

A spokesman for the European Commission called for restraint and appealed to Britain and France to deal with the situation calmly.

The EU also backed the claims of French fishers. In a statement issued overnight, the commission said the conditions set on licences for fishing in Jersey’s waters were in breach of the trade agreement struck on Christmas Eve.

“Under the EU-UKTCA [trade agreement], any proposed management conditions have to be notified in advance to the other party, giving them sufficient time to assess and react to the proposed measures,” it said.

“The commission has clearly indicated to the UK that the provisions of the EU-UKTCA have not been respected. Until the UK authorities provide further justifications on the new conditions, these new conditions should not apply.”