Overwhelmed hospitals in India begged for oxygen supplies on Saturday as the country’s coronavirus infections soared again overnight in a “tsunami” of disease, setting a new world record for cases for the third consecutive day.

Max Healthcare, which runs a network of hospitals in north India, tweeted that it had less than two hours of oxygen left while Fortis Healthcare, another big chain, said it was suspending new admissions in Delhi.

“We are running on backup, waiting for supplies since morning,” Fortis said.

Hospitals in Delhi have warned they are at breaking point. At the Holy Family Hospital, intensive care units are full and there is no room for any more beds.

“Almost every hospital is on the edge. If oxygen runs out, there is no leeway for many patients,” Dr Sumit Ray told the BBC.

“Within minutes, they will die. You can see these patients: they’re on ventilators, they require high-flow oxygen. If the oxygen stops, most of them will die.”

At the Jaipur Golden Hospital, a doctor told the BBC the government had allocated 3.6 tonnes of oxygen, to be delivered by 17:00 on Friday.

However, the supply – a fraction of what was promised – only arrived at midnight, he told the BBC. 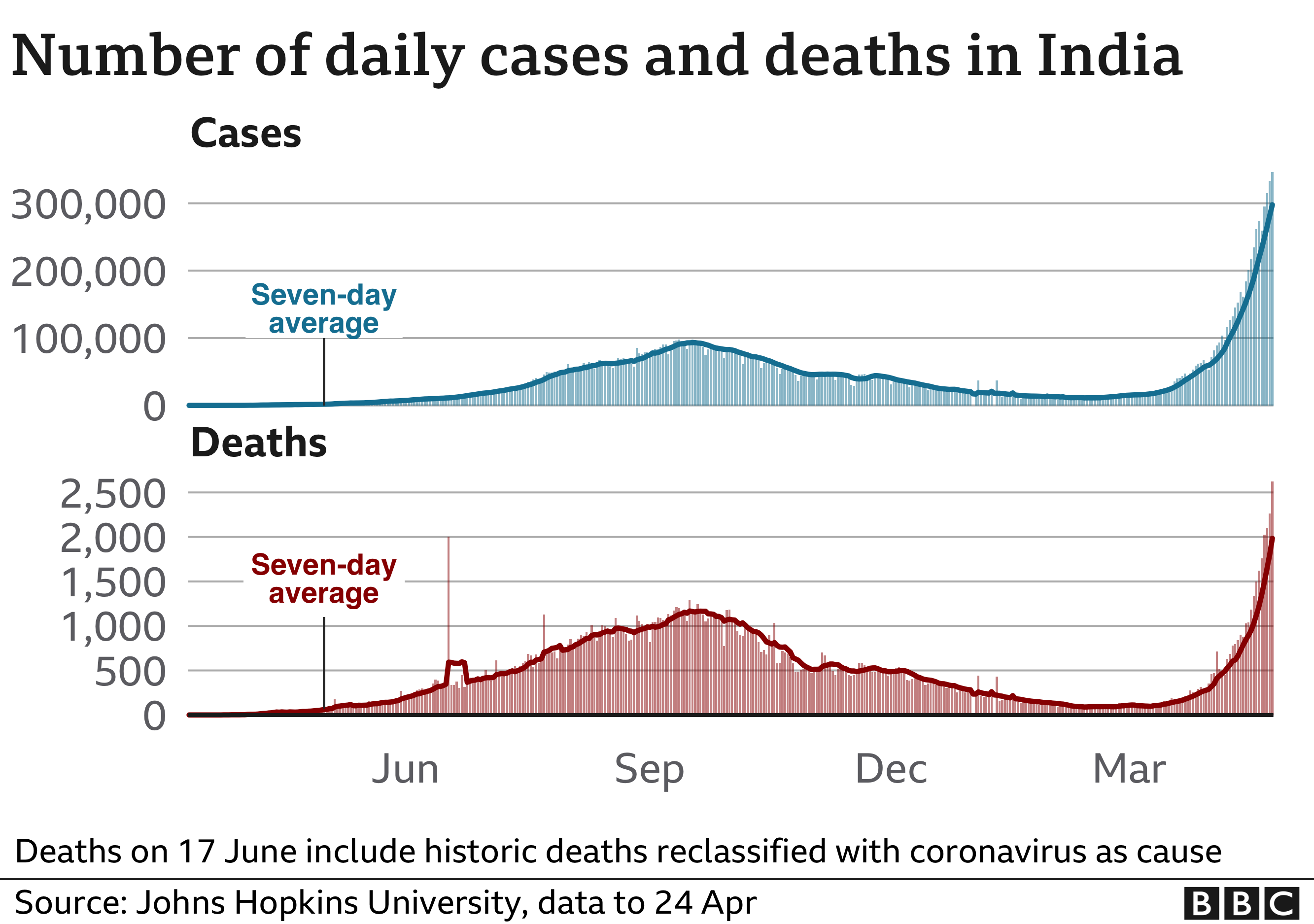 India is in the grip of a rampaging second wave of the pandemic, hitting a rate of one Covid-19 death in just under every four minutes in Delhi as the capital’s underfunded health system buckles.

The government has deployed military planes and trains to get oxygen to Delhi from the far corners of the country and overseas including Singapore.

Covid-19 deaths rose by 2,624 over the past 24 hours, the highest daily rate for the country so far. Crematoriums across Delhi said they were full up and asked grieving families to wait.

Hospitals in Delhi have gone to the city’s high court this week seeking it to order the state and federal governments to make emergency arrangements for medical supplies, mainly oxygen.

Relatives mourn over the body of a woman, who died from the coronavirus disease, outside Lok Nayak Jai Prakash Narayan Hospital (LNJP), one of India’s largest facilities for COVID-19 patients only, in New Delhi, India, April 22, 2021. REUTERS/Adnan Abidi

“It’s a tsunami. How are we trying to build capacity?” the Delhi high court asked the state and federal governments in response to this plea.

Television showed families tending to the sick in hospital corridors and streets as they waited for medical attention.

One man identified as Amit who was grieving for his brother at Delhi’s Jaipur Golden hospital said he had seen families running around with oxygen cylinders trying to get them refilled.

“You can’t leave me in the lurch,” a lawyer appearing for the Jaipur Golden hospital told the high court on Saturday, seeking its intervention.

The court asked the government to ensure supplies, as well to make security arrangements for medical centres amid people’s desperation. “We know how people react, let’s not have a law and order situation,” the court said in its direction to the authorities.

India surpassed the US record of 297,430 single-day infections anywhere in the world on Thursday, making it the global epicentre of a pandemic that is waning in many other countries.

The federal government had declared it had beaten back the coronavirus in February.

Health experts said India became complacent in the winter, when new cases were running at about 10,000 a day and seemed to be under control. Authorities lifted restrictions, allowing for the resumption of big gatherings.

Others said that it could also be a more dangerous variant of the virus coursing through India. It is the world’s second most populous country and people live in close proximity, often six to a room.

A frontline worker ignites a funeral pyre of a coronavirus disease (COVID-19) patient who passed away after a hospital caught fire, in Virar, on the outskirts of Mumbai, India, April 23, 2021. REUTERS/Francis Mascarenhas

“While complacency in adhering to masks and physical distancing might have played a role, it seems increasingly likely that this second wave has been fuelled by a much more virulent strain,” wrote Vikram Patel, Professor of Global Health at Harvard Medical School, in the Indian Express.

Experts say the only way India can turn the tide is to ramp up vaccinations and impose strict lockdowns in the so-called red zones of high infection. It has opened up the immunisation programme to all adults but faces a shortage.

India is currently using the AstraZeneca shot and homegrown Covaxin. It has also approved Russia’s Sputnik V and has urged Pfizer Moderna and Johnson and Johnson to provide it with vaccines.

Delhi chief minister Arvind Kejriwal on Saturday wrote to his counterparts in other states and Union territories requesting them to send the surplus of oxygen they may have to the Capital as the city faces acute shortage to treat critically ill Covid-19 patients.

“I am writing to all CMs requesting them to provide oxygen to Delhi, if they have spare. Though Central govt. is also helping us, the severity of corona is such that all available resources are proving inadequate,” he wrote on Twitter.

I am writing to all CMs requesting them to provide oxygen to Delhi, if they have spare. Though Central govt. is also helping us, the severity of corona is such that all available resources are proving inadequate.

It was not clear if there were any deaths or injuries among the migrants who were in the wooden boat, which was crammed with migrants on deck and inside the hull

Bangladeshis among 394 migrants rescued off Tunisia

From Morocco to Sudan, North Africa grapples with crippling new wave of COVID-19

Bangladesh now stands in the third position, with China holding its first position

The High Commissioner extended all possible cooperation to business leaders at the event for investing in Bangladesh and exploring future avenues together.

Five other areas, including Hokkaido, Kyoto, Hyogo and Fukuoka, will be placed under less-stringent emergency restrictions.

TeamDoctor has nationally accredited courses and a substantial library of 3-5 minute films to help keep you well at work.

Why we need to take employee sleep problems more seriously

Handmade with all of the care and attention you would expect from a master craftsman.

Earlier this week — five people in a landslide caused by the rains and a child swept away by floodwaters.