“The man was apprehended immediately and legal measures have been taken against him,” the spokesman said.

MAKKAH — The Haram Security Forces arrested a man carrying a knife, at the Grand Mosque in Makkah on Tuesday afternoon. The spokesman of Makkah region police said that the man was spotted chanting expressions in support of terrorist groups and organizations after Asr prayers on the first floor of the holy mosque. 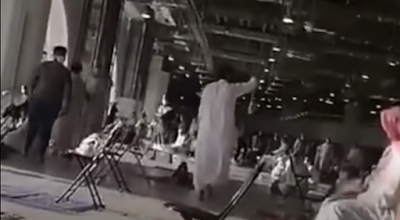 “The man was apprehended immediately and legal measures have been taken against him,” the spokesman said.

The man “did not respect the sanctity of the place. Allah has made the Grand Mosque a place of worship, including prayer, tawaf (circumambulation) and Hajj”, said President of Haramain Affairs Sheikh Sudais.

The detainees are being taken to DB office at Mintoo road in the capital.

NID cards need to be submitted for filing cases: HC

A new "government of change" will be led by right-wing nationalist Naftali Bennett of the Yamina party.

As per the new restrictions, the land border with India will remain closed till 30 June

Border with India to remain shut for another 16 days

‘I do not believe that polls lead to coronavirus transmission’

With cases soaring in bordering districts, experts fear that Bangladesh may face the worst outbreak of the deadly virus by the end of June