Jermain Defoe marked his first international cap in more than three years with the opening goal as England took another step towards next summer’s World Cup finals with a 2-0 win over Lithuania at Wembley.

Defoe’s last outing came against Chile in November 2013 but he vindicated his recall after extending fine goalscoring form for Sunderland with a 21st-minute strike from Raheem Sterling’s cross.

Substitute Jamie Vardy added a second as England extended their lead at the top of Group F to five points with the other four teams in action later this evening.

Gareth Southgate will welcome the positive result which keeps England firmly on track for Russia but England laboured for long periods against well-organised and stubborn opponents.

Vardy’s 66th-minute effort eventually gave England some welcome breathing space and Southgate can now look forward to a June double-header – a qualifier against Scotland followed by a friendly in France – from a position of strength.

Respects were paid to the four victims of last week’s terror attack in Westminster before kick-off.

Mayor of London Sadiq Khan, Football Association Greg Clarke, Acting Met Commissioner Craig Mackey and Karen Bradley, Secretary of State for Culture, Media and Sport, each laid a wreath in the centre-circle prior to an impeccably observed period of silence.

Once underway, the pattern was set early on as Lithuania, ranked 107th in the world by FIFA, sat deep and defended in numbers, putting the emphasis on England to break them down – a task they regularly face in qualification mismatches such as this.

Southgate reverted to a 4-2-3-1 system having experimented with 3-4-2-1 in Wednesday’s 1-0 friendly defeat against Germany with Alex Oxlade-Chamberlain replacing Jake Livermore in central midfield, Sterling recalled and John Stones partnering Michael Keane at centre-back. 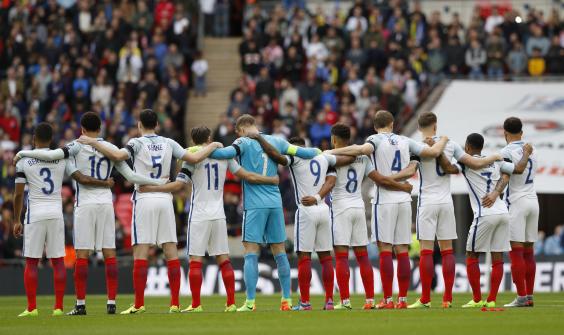 England were a little slow into their stride but came alive after 20 minutes. Adam Lallana produced a clever reverse pass to release Sterling in the inside-right channel but Lithuania goalkeeper Ernestas Setkus rushed off his line to make a smart save.

England would not be denied for long. A minute later, Sterling popped up on the opposite flank, bursting into the box before producing a low cross which Defoe met first-time, sidefooting coolly past Setkus.

Lithuania offered almost nothing as an attacking force – Fiodor Cernych dragged a shot tamely wide in a rare foray forward – and Defoe almost doubled England’s lead shortly before the half-hour mark when a trademark snapshot from the edge of the box arrowed just wide of Setkus’ right-hand post.

England’s dominance was so absolute it came as a shock the visitors almost equalized on the stroke of half-time. Nerijus Valskis – clearly offside but not flagged – beat England captain Joe Hart to a long header forward but Stones was able to clear the ball away to safety as it trickled towards the net. 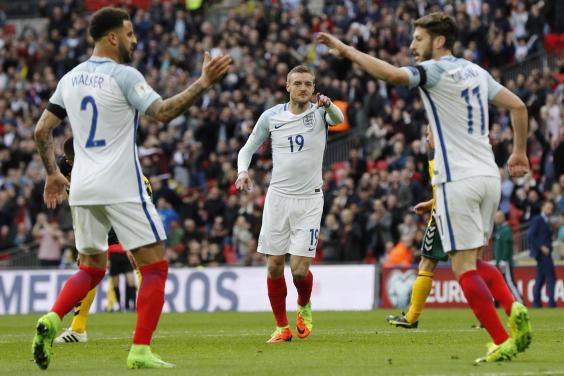 Valskis went close again shortly after the restart as Hart was forced into a save low to his right.

Aside from Oxlade-Chamberlain taking a moment out from an error-strewn display to test Setkus from long range, England looked sluggish and Southgate attempted to freshen things up with a double substitution on the hour: Marcus Rashford and Jamie Vardy for Defoe and Sterling. 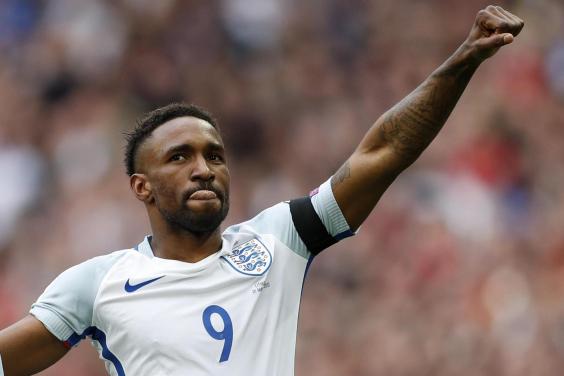 Vardy took seven minutes to make his presence felt. Kyle Walker fired a pass into Lallana on the edge of the box and the Liverpool midfielder cutely turned it into Vardy’s path with a deft touch. The finish was clinical and composed.

He was unable to replicate those qualities when sent clear late on by Rashford’s clever through ball, capping a lively cameo from the Manchester United youngster, but England had long since completed the job adequately enough.