BY JANELLE OKWODU::Kate Moss is a hard act to follow. The British supermodel looms large in the world of fashion, where she is idolized for her groundbreaking career and effortless style. Many have attempted to duplicate Moss’s magic, but her daughter Lila Grace Moss-Hack isn’t one of them. The model, who turns 18 today, has her own perspective on dressing, one that reflects the offbeat tastes of her generation. Although both her parents are in the industry—her father is creative director and Dazed Media co-founder, Jefferson Hack—Moss doesn’t go for the flash of head to toe runway looks or “look at me” statement pieces. Instead, she’s comfortable in clothing that is subtly chic.

When she’s spotted on the street doing normal teen activities (accompanying her mother on coffee runs) and not so normal ones (stepping out of The Ritz and into a flurry of paparazzi flashbulbs), Moss keeps things casual. Still, she shares her parent’s appreciation for style. During fashion week, she regularly takes a place in the front row and wears designer creations with ease. The logo-covered menswear button-down by Kim Jones she wore at Dior Men’s fall/winter 2020 wasn’t the most outré look at the collections, but it suited her perfectly. Likewise, the starburst-covered midi dress she chose for Miu Miu’s Resort 2020 bash in Paris provided plenty of retro girliness while remaining understated. 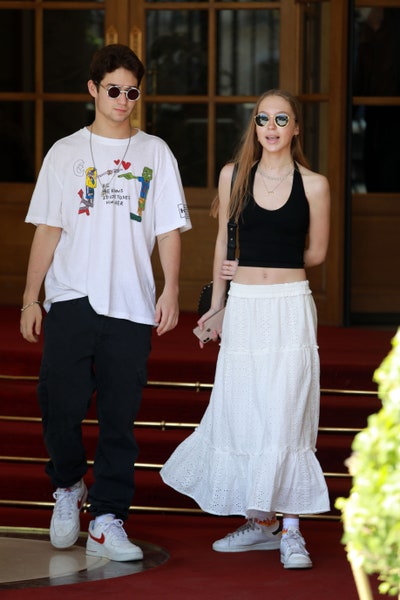 Making inconspicuous outfits feel special is a talent Moss shares with her mother, but lately, she’s begun to branch out into extroverted fare. At Marc Jacobs and Char DeFrancesco’s wedding last year, she arrived in a glitzy, gold lamé mini dress from Saint Laurent. An ideal party frock, the look was well suited for a night of revelry and celebration. Kim Jones’ birthday party earlier this month prompted an even more daring ensemble. In a leather jacket and transparent lace gown, Moss flirted with the kind of exposed skin her mother made famous in the 90s. Kate Moss pushed the envelope back in 1993 when she waltzed into the Elite Look of the Year afterparty in a see-thru metallic number immortalized in a thousand snapshots. The appeal of such audacious fashion hasn’t dimmed; when the younger Moss pulled out a considerably tamer version of the look for Jones’s fête, it felt like the passing of a torch.

Generation Z’s fashion icons still look to ’90s stars for inspiration, but the best—Zendaya, Rowan Blanchard, and Billie Eilish among them—value individualism above all else. Moss has access to one of the greatest archives of all time, but she’s committed to doing it her way. Whether that means creating a few iconic looks of her own or leaning into the whole jeans and t-shirt thing remains to be seen, but one thing is sure: this is just the beginning.

Emphasising on increased political mutual trust, Ambassador Jiming said the Chinese Embassy will continue to work diligently to promote the continuous development of bilateral relations, and facilitate the baking of a bigger cake of mutually beneficial and pragmatic cooperation between China and Bangladesh

Bangladesh keen to have enhanced economic ties with China

Indian High Commissioner said India will act as a compliment, not a competitor, in development, which will benefit both countries economically

According to the latest data of UNWTO, international arrival dropped by 81 percent in July and 79 percent in August.

International tourism down 70% in the first 8 months of 2020

The EU has shaped the future of Bangladesh by opening its markets, but now it must make sure that companies operating in these markets play by the rules, argues Tomáš Zdechovský.

The EU must not let Bangladesh’s workers down

US coercing Bangladesh against China is pointless: Chinese ambassador

His comment came a day after US President Donald Trump’s chief of staff Mark Meadows told CNN that the administration’s focus had moved to mitigation, not stamping out the virus

Giving up on virus control ‘dangerous’: WHO chief

The bank said it is considering charging for products such as current accounts that customers in Britain are used to having for free.